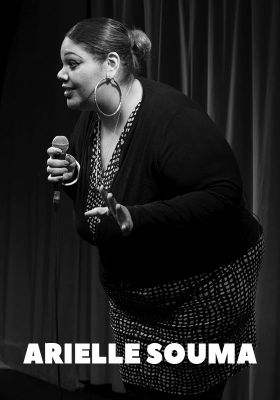 
A force to reckon with and a dynamic " wild card" in a line up. Punchy, blunt, accessible; french and Arielle Souma performs with a distinctive style. Performs for major clubs like The Stand, Glee Club, Top secret, Angel comedy club ... 2019 NOT SO NEW COMEDIAN OF THE YEAR finalist 2017 NATYS finalist 2016 frog & Bucket Manchester " World Series finalist " 2016 "So You Think You're Funny " finalist 2016 Fresh comedian of the year finalist 2016 " Leicester Square new comedian of the year " semi finalist 2016 semi finalist of funny women awards Winner of frog and bucket Jan 2016 in Manchester Finalist golden jester 2015 competitions "Arielle Souma is just what the comedy industry needs and should be forced upon every audience until they buckle under her spell" _Frankie Boyle « Her delivery is really strong and lively, she’s brilliant fun and totally commands the stage. She killed it and totally raised the roof. Clearly very accomplished, she just has it. » _ The Stand Comedy Club Arielle Souma dominates the stage! Big and bold with bags of sass and nice garnishes _ Steve Bennett, Chortle "Super sassy and super funny. Arielle Souma is a breath of fresh air on any comedy bill" _ Barry Ferns, Angel comedy club