Matteo Valentini is an Italian actor, screenwriter and director. Trained at the E. Fabbri drama company in my hometown in Italy, he left his country for London, where he studied screenwriting and film making for two years, expanding his knowledge of the field by attending many filmmaking and acting workshops at two film school in central London: the Raindance Film and the City Academy. He’s a crime/action/comedy actor and SPACT, with great focus on mad/junkie and antihero characters. He can easily jump from the mad antihero, ready to save the day but without caring about how many bad things he will have to do during his path; to the bipolar and problematic psycho who can’t distinguish reality from fiction. At the same time, he loves to play the “average guy”, whom his desire is to live a life with a normal job and a normal family but struggles in an inner battle everyday. In 2017, Valentini sold the horror feature Acid Pit Stop (2019) to the Silent Studios company in Southend, UK, where the movie was shot under the direction of Jason Wright, and with Bruce Payne among the cast. The same year, he wrote, directed, produced and starred in the multi-awarded comedy web series The Fridge: An Ugly Web Series (2017), available on YouTube in Italian language with English subtitles, and awarded for "Best Web Series of the Month" at the AAB Film Festival. In 2018, Valentini wrote, produced and directed the micro-short drama B-Love (2018), which brought him to win the award for Best Director in the Super Short Category - Fall 2018 at the Alternative Film Festival in Toronto. From February 2019, he’s starring in Unnecessary Posts: weekly webseries he created and directed. In October 2019, Valentini wrote, directed and starred in the comedy short I Really Need to See a Good Doctor, starring Veronica Osimani and now in its festival run. Right after this short release, Valentini starred in the sci-Fi short “The Debt Recovery” directed by Nick Blair, in the comedy short “#NotAnAd”, and in an adaptation of American Psycho called "American Psycho Reborn". In December 2019, Valentini directed and performed in the comedy short he wrote "A Movie Without an Ending", now in post production. In January 2020, Valentini starred in “The Sons of Eli” a psychological drama directorial debut of Reiko Nagayoshi; soon after, he starred in the experimental short he wrote and directed “An Instagram Story”. 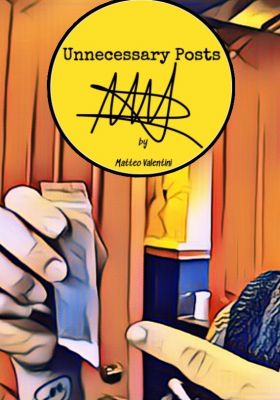 Valants and his many alter egos try to tackle everyday's life, between social media, today's technology and quirky situations.