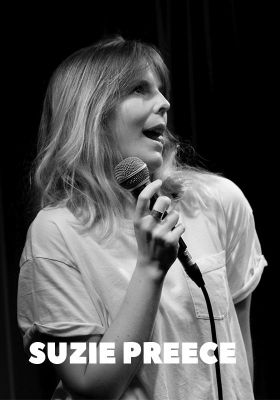 
Suzie Preece is an award-winning comedian, actress and writer. She trained at the Bristol Old Vic Theatre School and has since performed both theatre and comedy at the Edinburgh Fringe, and in venues across London. Credits include: Vikings BBC, A Midsummer Night’s Dream Southwark Playhouse, Measure for Measure Shakespeare's Globe, The Capone Trilogy Edinburgh Fringe, The Last Dance Hoxton Hall, Ways and Means New York (various). Suzie wrote and performed in the comedy online series ‘Turn Me Online’ that won Best British Series at the Raindance Film Festival and earned her a Best Actress nomination. In 2018 she got signed to a Mexican literary agency after writing an Anti-Trump telenovela, called '¡Hola, Paulina!' featuring Miles Jupp as the ‘sexy priest’.