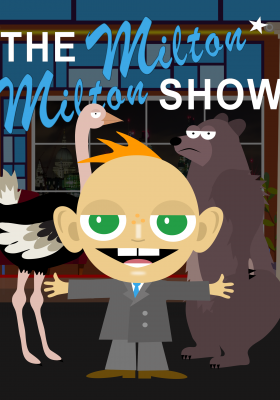 
An official selection for Harrogate Film Festival 2020, Brian Luff’s “Milton Milton Show” is a brand new short-form, animated comedy series produced for mobile syndication platforms. The show is hosted by Milton Milton – a foul-mouthed TV celebrity with the world’s most annoying voice and personality. Milton is aided by a reluctant cast of animals, robots and aliens who he bullies into helping him produce his infamous late night chat show. Milton Milton received an Honourable Mention at the UK Seasonal Short Film Festival 2019 and was selected for screening at the UK Offline Web Fest 2019.